A GREEN group is calling for an investigation into the unlawful extraction of water in a drought-threatened zone. 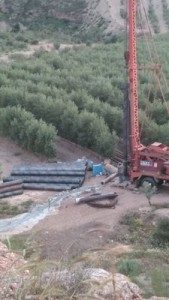 Ecologistas en Accion has urged the Spanish Prosecution Service to investigate the unnamed business, which is currently carrying out suspicious activity in a super intensive olive grove in Sorbas, Almeria.

The group fears that the company may be attempting to illegitimately extract water from the Altos Aguas aquifer, which the Olive Press highlighted last issue is being devastated due to potential over exploitation by olive groves.

However, the junta’s environment department has insisted that the work is simply a ‘water survey’ and has given its authorisation to go ahead.

It added that it will ‘verify’  that no other type of action has been carried out other than those authorised after the work has been completed.