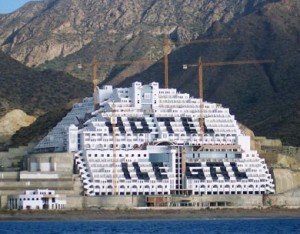 The government’s Minister for the Environment, Isabel Garcia Tejerina, and Junta de Andalucia minister Jose Fiscal are thrashing out a plan to flatten the Cabo de Gata beachside complex.

Last week, Spain’s Supreme Court ruled that the hotel was built on protected land and belonged to the Andalucian Junta.

“This allows us to start demolishing it,” said Garcia Tejerina.

A date has not yet been set for the proposed demolition.

The president of the Andalucian court, Lorenzo del Rio said the decade-long court battle was ‘definitively resolved’ from a judicial perspective.